On September 21, the Baku World Judo Championships 2018 were officially opened by the highest authority of the host country, His Excellency İlham Aliyev, President of Azerbaijan, in the presence of the Minister of Youth and Sports Azad Rahimov. 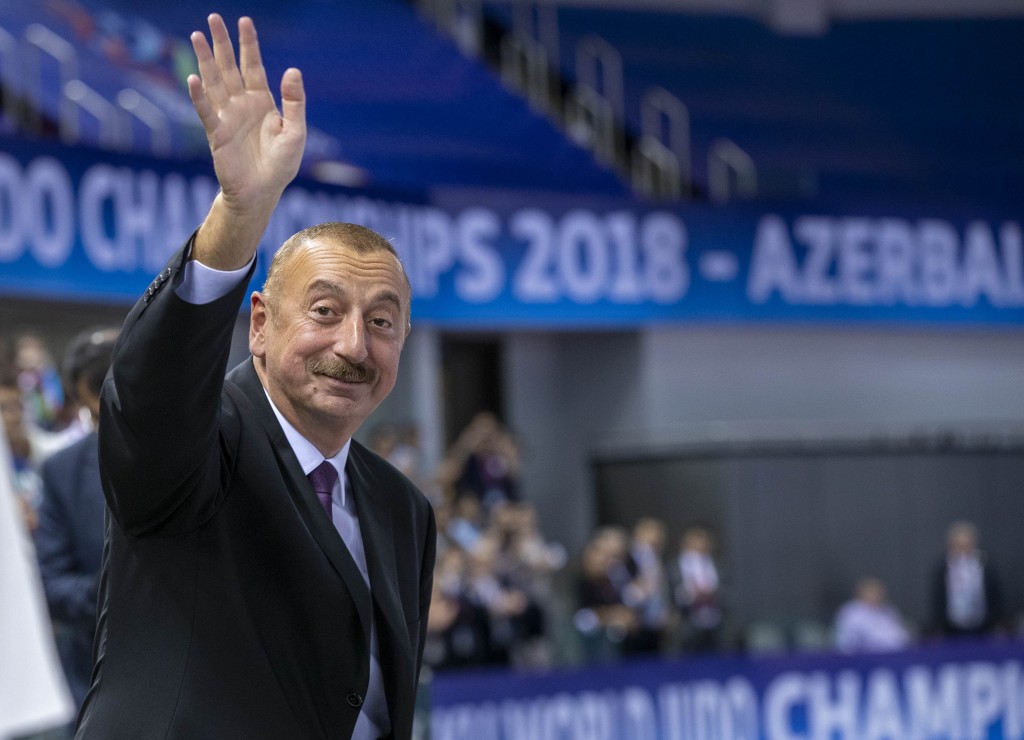 His Excellency İlham Aliyev, President of Azerbaijan, atended the Baku World Judo Championships and declared them officially open
After today’s preliminary rounds, the competition venue went completely dark and on the giant video screen a countdown clock appeared ticking away the seconds towards the start of the opening ceremony of this year’s World Championship feeding the anticipation of the audience.
“Azerbaijan continues to strengthen its reputation as a sports country. The first European games in 2015, Islamic Solidarity Games in 2017 and other prestigious sports competitions held in Baku, introduced Azerbaijan to the world as a sporting country,” the Master of Ceremony informed the capacity crowd. “The medals won by its athletes at the International, European and Olympic Games demonstrate the strength and power of our country. 18 medals won at the last Summer Olympic Games in Rio de Janeiro are a confirmation. Undoubtedly, these achievements are the result of the attention and care shown by President İlham Aliyev to sports and athletes. Judokas have made a major contribution to the victories of our country.” 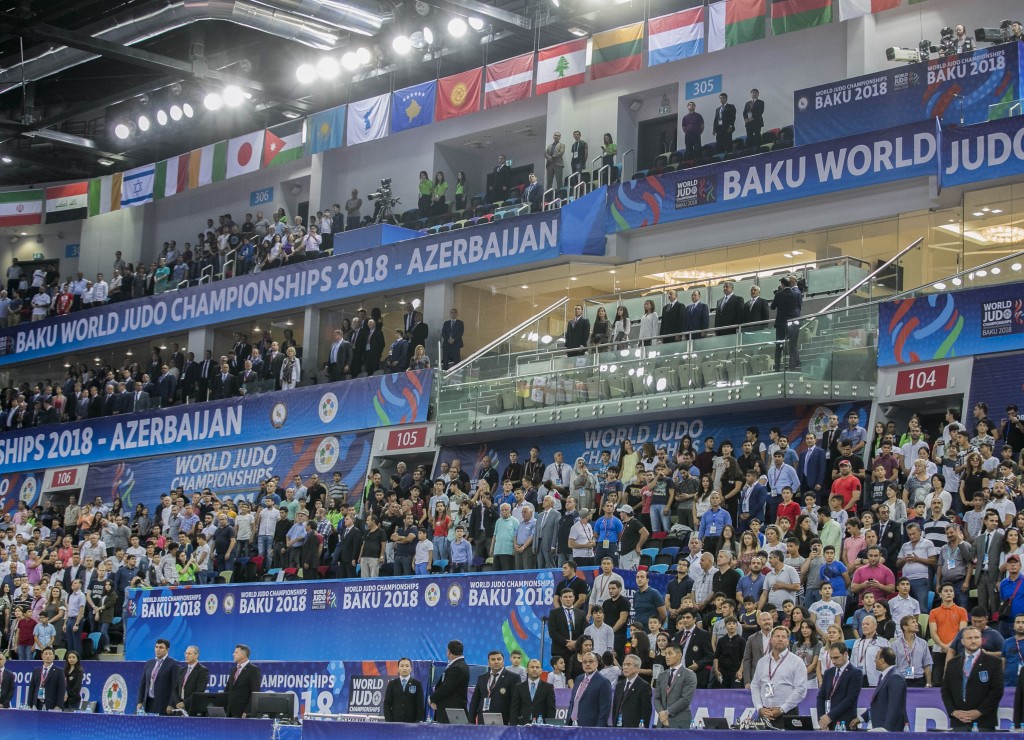 Indeed, the development of judo in Azerbaijan over the past few years has been rapid. The country has already won the complete Olympic medal set of bronze, silver and gold: bronze by Movlud Mireliyev, silver medal by Elmar Gasimov and Rustam Orudzhev, gold by Nazim Huseynov and Elnur Mammadli.
After the introduction, images of the flags of all participating countries were sequentially displayed on the venue’s giant video screen. Following the parade of the nation’s flags, IJF President Vizer and AJF President Abdullayev mounted the stage to deliver a speech. 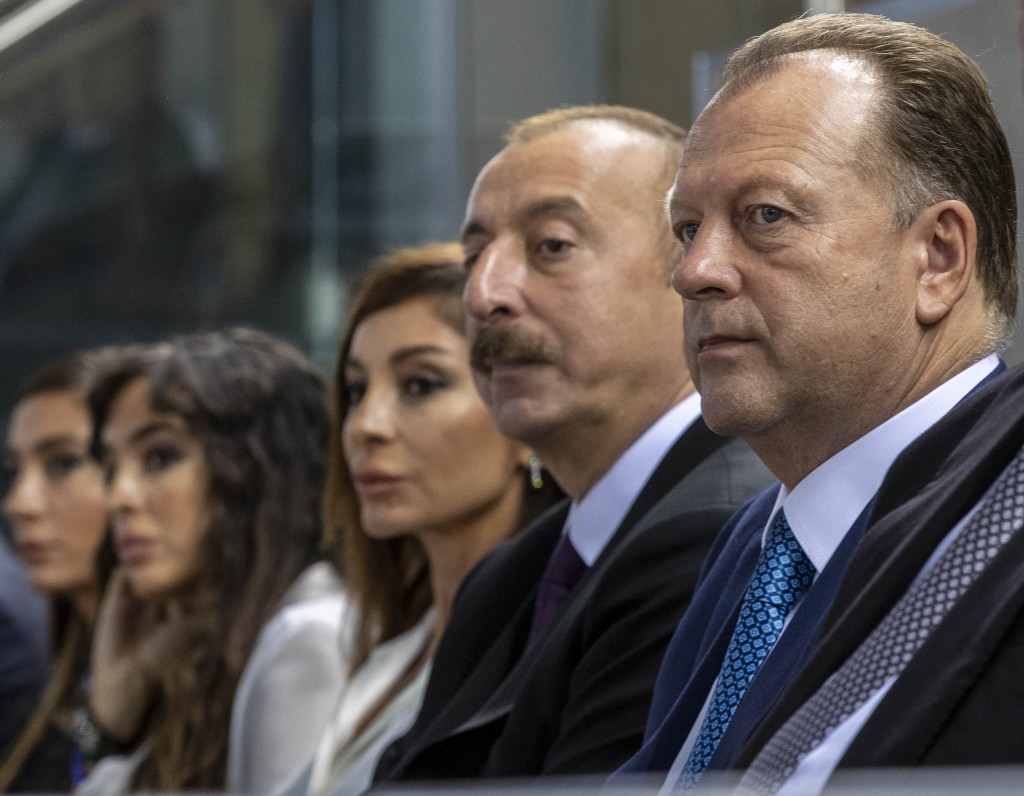 His Excellency İlham Aliyev, President of Azerbaijan (center) together with IJF President, Marius Vizer, and Azerbaijan First Lady Mehriban Aliyeva
“Judo has become a very popular sport in Azerbaijan. Many youngsters of all the regions of our country are involved in judo today,” AJF President Abdullayev said. “With this World Championship judo will become even more popular.”
“I want to thank Azerbaijan for hosting this IJF World Championship and congratulate our hosts as well for the fantastic organization, hospitality and friendship. Azerbaijan is a country that impresses with its economic development and culture,” IJF President Vizer said.
“I wish all athletes a successful competition these following days, enjoy the city of Baku and exchange your culture with the local culture.” 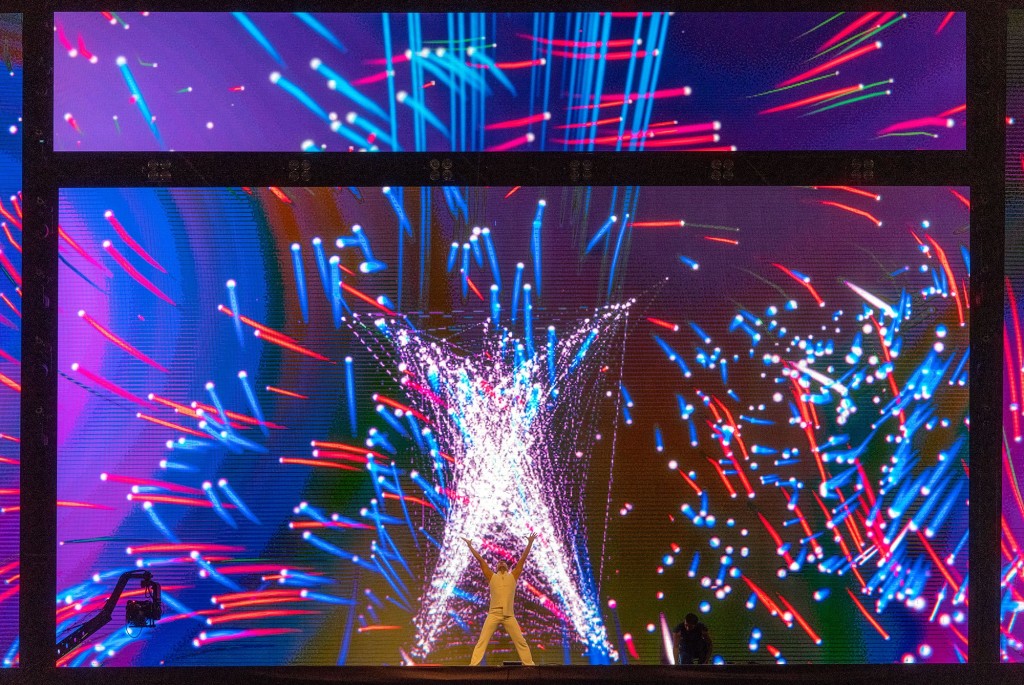 After both Federation Presidents had addressed the crowd, the President of Azerbaijan, His Excellency İlham Aliyev, declared the championship open, followed by the playing of the national anthem of the host country and the IJF Hymn.
Consequently, the audience was treated with a colorful video depicting Baku and Azerbaijan in olden and modern times where judo travelled throughout the feature film as the ‘file rouge’ presenting the host country’s national coaches and top judokas. 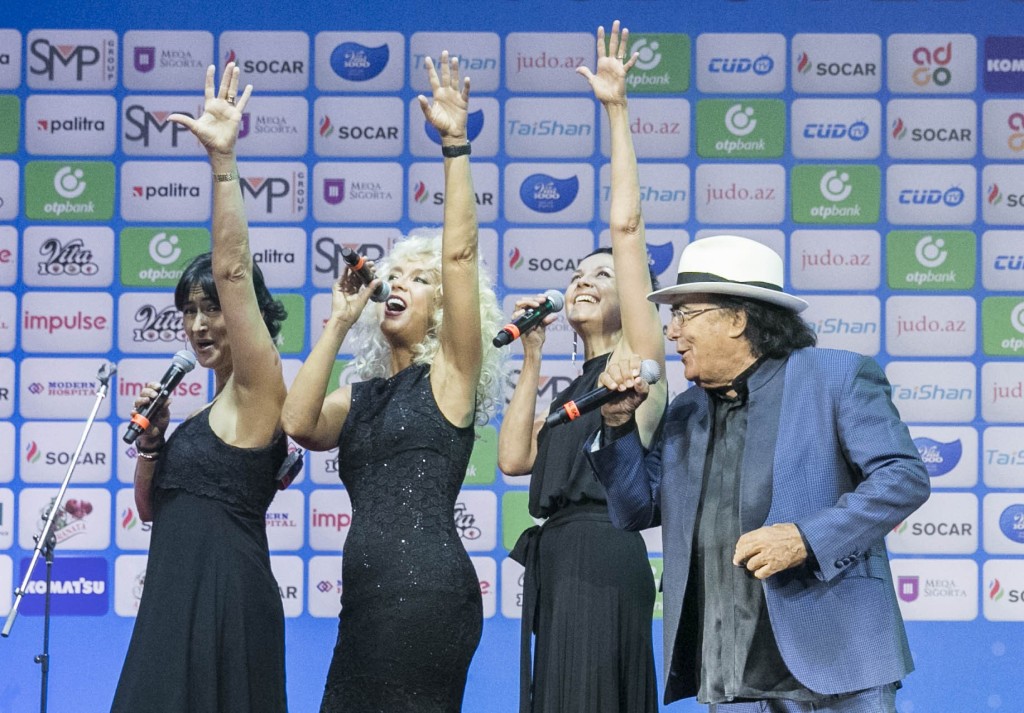 Simultaneously, a grand performance by jazz singer Sevda Alekberzade, jazz pianist Etibar Asadli, tar player Shahriyar İmanov and mugham singer Babak Niftaliyev took place on the stage.Then, attention moved to the upper stage. ‘Singularity’, a special dance performance took place on the stage where the dance moves were being synchronized with a myriad of colorful images flooding the giant screen enchanting the audience.The opening ceremony closed with a stellar performance of Italian singer Al Bano and his band featuring all his hit songs.